Prashant Trivedi ~ Meaning Behind the Name


Some of the more Curious have been asking for

the Meaning behind my Name (for this earthly incarnation!) ... So here are

Prashant ( pronounced Praha - shant with a softtat the end)

Pra-shant is thus also the sanskrit equivalent of Pacific (Peacefic)

P is the P-ole you spin around

What was lost is now being found ... 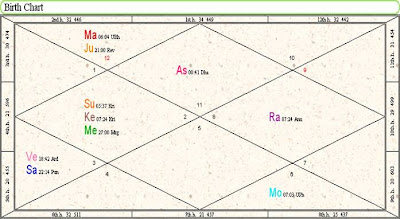 1. Every natural malefic is with a natural benefic & that benefic also happens to be its best friend. For example Mars is with its best friend Jupiter and so forth

2. All the friends form teams i.e Jupiter/Mars/Moon & Saturn/Mercury/Venus. The Rahu Ketu axis separates the friends and enemies with Sun, Mars, Jupiter on one side and Mercury, Venus, Saturn on the other.

3. The self (first house) is represented by all the archetypal male energies. These male energies are Sky, Air, Lightning and Sun which are all situated above the feminine Earth. Aquarius the electric air sign rises on the Ascendant. The Ascendant lord Saturn is in a sky/space nakshatra Punarvasu and is conjunct Venus in Ardra, a nakshatra closely associated with lightning. The Sun is placed in Krittika a nakshatra ruled by Sun and is strong in a quadrant house through its association with Ketu (which increases a planets strength fourfold through close conjuction) 4. Mercury is the connecting point of the whole chart and is the atmakaraka (soul significator).Mercury is connected with Venus through an exchange. Saturn and Moon are in Mercury's signs, Gemini and Virgo respectively. Mercury is conjunct Sun and Ketu. It is related to Rahu by aspect. It is related to Mars by being placed in its nakshatra Mrigashira, and related to Jupiter by Jupiter's placement in Mercury's nakshatra Revathi. So Mercury the atmakaraka and buddha/vishnu planet is aptly the pivot of the chart

6. Born at midnight (20th changing to 21st) in India, when it was midday (20th) at the temple in ChichenItza. The temple was built to align perfectly for showing Sun's exact conjunction with Pleiades, the central star Alcyone in the era 1970-2012. 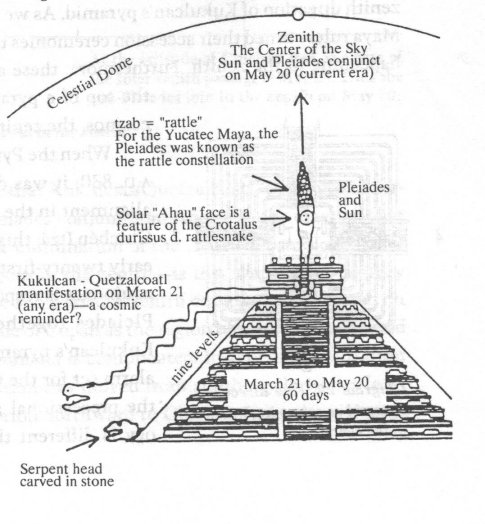 7. Mercury and Venus are the Quetzacoatel (coat of many colours) planets in the chart, because they stick with the Rahu Ketu Serpent axis even in the navamsha. Venus in Gemini is the plumed serpent, the archetypal Birdman. The 4th house represents vehicles in the chart, so Venus the 4th and 9th lord can be seen as acting like the vehicle for Saturn, the Self significator.Venus is thus playing a Garuda role. It is placed in the shastiamsha Amrita, symbolic of how Garuda gets the nectar. Saturn, the ascendant lord, acts as the Vishnu planet. Vishnu is represented by blue, the colour of the sky. punarvasu represents the sky, and Saturn relates to the colour blue; the combination thus denotes a blue sky. punarvasu is also related to the mother of humanity Aditi and Vishnu was born through her as the avatar, Vamana. Vishnu is depicted as a blue being draped in golden yellow. This symbolises the blue sky with a yellow Sun as clothing

So it is clear that Saturn is representing Vishnu and Venus is representing Garuda (birdbrain). Saturn (Vishnu) rides on the Venus (vehicle and nectar). Vishnu holds the wheel of time (sudarshan chakra) with his right index finger. The right hand index finger is represented by Jupiter in PT's chart, and is related to PT's right hand through conjunction with the 3rd lord. The wheel of time is personified by Jupiter's placement in Revathi (thetimenakshatra)

8. Shiva component of the chart can be seen through the sign Aquarius (aqua vitae or waters of life), rising on the ascendant. The waters of life are depicted as Ganga falling from Shiva's hair. This can be seen as ultraviolet etheric Rain of perennial consciousness. Venus is related to the Rudras or time lords, through its placement in Ardra. The Rudras are embodiments of Shiva energy. The fixed signs Taurus, Leo, Scorpio and Aquarius all represent Shiva

In PT's chart there are exactly 5 planets in fixed signs (Shiva signs) and five planets in mutable signs (Vishnu Signs). This combination results in perfect merging to produce Hari-Hara (half Vishnu, half Shiva).

9. Mars, the planet of blood, is in Uttarabhadrapada an oceanic nakshatra. Oceans and blood have one important thing is common ~ both are salty. So the planet of blood is in a nakshatra representing oceans (Earth blood). The largets amongst earth's oceans is Pacific, which translates into Prashant in Sanskrit. So the name Prashant is perfect for this incarnation. Also the 2nd house presides over the name of a person.

10. Our Sun revolves around Alcyone the central star of Pleiades. The Incas and the Aztecs through their pyramids at Chichenitza established the date for a precise conjunction between our Sun and Alcyone as 21st May. Therefore the Sun in Krittika on 21st May would be the accurate representation of Sun (solar system) connecting with its galactic counterpart

11. Garuda (the bird brain) requires a Turtle & Elephant to satiate his hunger. The turtle is an uttarabhadrapada animal, whilst the elephant is a revati animal. The 2nd house relates to eating and is occupied by the planets Mars & Jupiter placed in uttarabhadrapada and revathi respectively.

12. The chart as a whole represents the churning of the ocean story. Jupiter and Mars are in the sign of the ocean, Pisces. Jupiter is representing the churning through Revathi. Revathi relates to the wheel of time, a wheel that goes round and round like a churning rod. Mars is in Uttarabhadrapada, the nakshatra representing the tortoise. In the story Vishnu assumes the form of a tortoise to support Mt Mandhara. Moon in Uttara Phalguni represents the axis of the churning, and is in straight relation to the Mars turtle, as Moon and Mars are exactly 180 degrees apart. Moon represents the seat of Brahma. Rahu and Ketu are representing the serpent used in the churning. The serpent is positioned at a right angle in respect to the axis. The devas represented by Sun and Mercury are holding the tail Ketu. Sun is placed in Krittika which relates to the asterism Pleiades. So Pleiades becomes representative of the Devas (righteous ones). The nectar which comes out of the churning is represented by Venus as it placed in Amrita Shashtiamsha. Vishnu assumes the form of Mohini in this story to keep the unrighteous from gaining the nectar. It is interesting to note that PT was born on Mohini Ekadashi ...